How to say thanks for special gifts.... 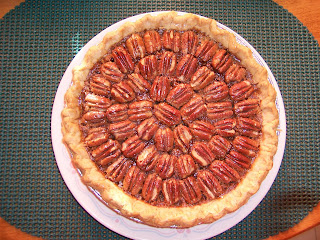 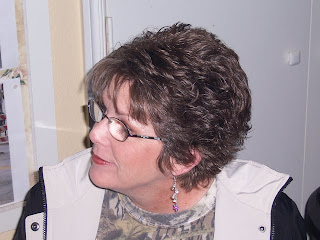 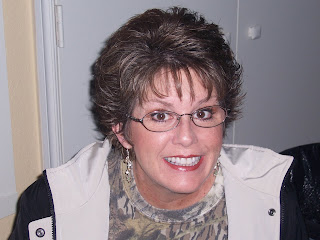 I look like a big ol' goober fish with my glasses on sometimes. But, at least I can see. ETK thought I looked really young in one of the pics I posted...that's because I didn't have my glasses on!! I need contacts again. Any who..........not too bad for a 53 year old, right? Lovee really likes it. He took the pictures for me. Love me some Lovee!
Posted by tt at 1:35 PM 3 comments 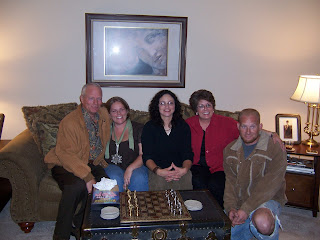 Obviously this id a group picture of Lovee,Sunshine & Jeanne,Moi and Baby boy 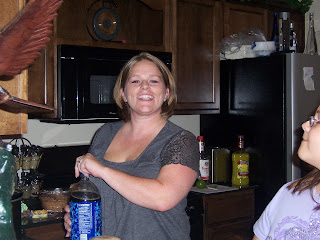 Sunshine was having a fab time....isn't she the cutest? Check those dimples! 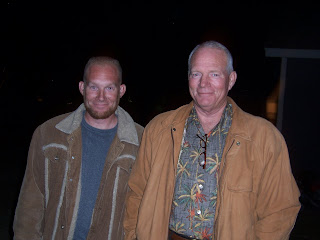 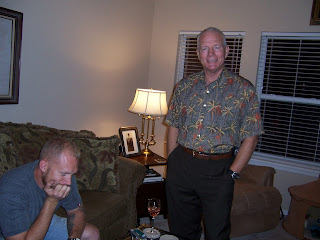 A quick game of chess made Baby Boy think really hard. Lovee is the master.
We had a great time and they got a lot of great stuff.
Posted by tt at 3:14 PM 3 comments

update on the Dad....and other stuff

Anyway,they could work him in about 4 p.m.. Great I say. So I take her to the Dr..The Lazar surgery went well. She can see a bit more light but that's all. That's the best her eyes are going to get.

After I take them back home, Lovee decided to paint their garage floor like Dad's been wanting. ( No hurry Dad's been saying...which translates into I want it done yesterday. ;) ) I come back up here to do my cazillion errands then go back to get Dad to the Dr. So, we're at the Dr. and the Dr. comes in and says..." uh-o you've got SHINGLES!" I gotta tell ya, my heart sank. Lovee got that as soon as we got back from Greece and it's not fun!! Sooooo painful.On top of that, his eyebrow was bothering him so much that he kept rubbing it and popped some of the blisters and now has Impetigo there. Poor guy! So four meds later we're home. Lovee and I went and got Pizza to have w/ them....it was late...almost 6:30.

My Mom was complaining earlier that Dad was grumpy and had grumped at her..I said it was just because he didn't feel well and not to take it personally. She said that's no reason to take it out on her! I repeated what I had already said and added that she too gets grumpy when she doesn't feel well. She said to remind her of it next time. Sheesh!!!! You bet I will. Well, after we found out what was wrong with him she said she felt bad about complaining . Uh, Mom there's a lesson here......think ya got it? Naw!!!!!!!!!!!

So, my poor sweet Daddy has Shingles on the left side of his head. The really bad part about all this is that the Dr. is afraid it's in his eye too!!!! So, today he's going to an Opthomologist to get that checked. If it is in his eye it could lead to blindness!! Crap!!! He's almost blind now! So, more on that later.

See what Breakfast does for ya.... 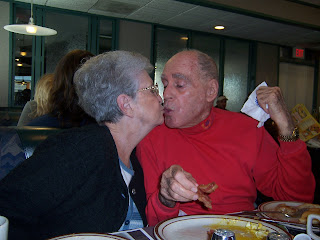 Are they cute or what?! LOL Actually I think Dad looks kinda like a Monkey...LOL..... 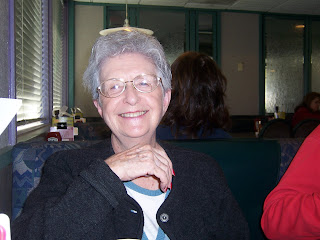 Mom says I have to let her know when I'm taking her picture, otherwise she looks mean. Hummmmm, She's always been proud of being the 'meanest Mom' ever. Guess she just doesn't want to look the part. 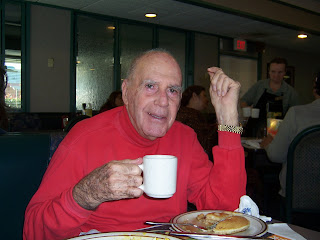 My sweet Daddy! He usually wears glasses but he forgot them that morning. This is his version of a smile when his Breakfast is being interrupted. LOL 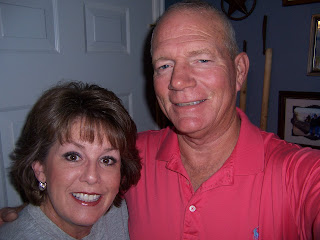 And who do we have here?????? Me and my Lovee. Lovee went with me Saturday. That's why I'm smiling so big. Well, that and we just got through with a dance around the living room.
Tomorrow, I'll see if I can get pics of Pebbles and Short bus.
Anxious aren't you!
LOL
Posted by tt at 9:41 PM 4 comments 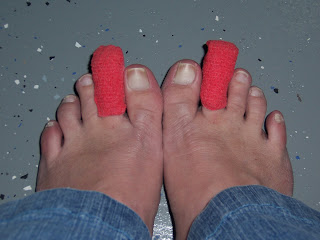 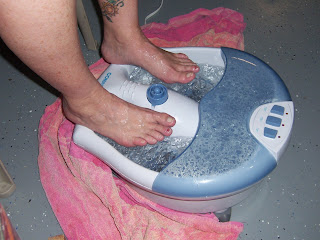 I had to take the wrap off 2x a day to soak in salt water. The totally amazing thing is it never hurt to soak. The first time I had it done, the nail bed wasn't 'killed' and it burned like HELL!!! This time ...nothing but pleasure. It felt so good to get the wrap off. LOL
Lovee was so good. He fixed my soaking tub each time. Love me some Lovee! 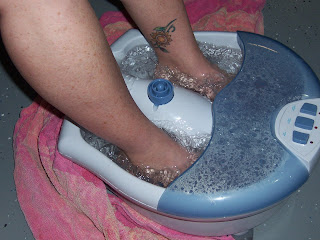 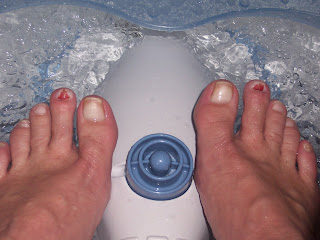 Well, there they are. Not so bad huh!? They already feel better than they did before I had the nails removed...go figure. 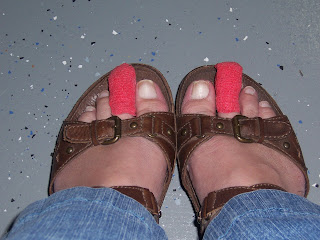 All wrapped up again and ready for the day.
These are my Ecco's I found for half price. Little did I know that these would be the only shoes I would be able to wear for a while. Seriously came in handy.
Ya know...every time I post pictures there's this huge space left at the bottom that I can't get rid of.
It's aggravating the poopers out of me!
I'm so computer challenged that these things sometimes get my goat!
ha
Posted by tt at 3:32 PM 5 comments

This says it all people...

I can love you now and learn you later-
I'm easy, I just love people.